Those wondering just how much can be accomplished in one lifetime need look no further than Tom Laughlin - an activist first, filmmaker second among other things including philosopher and educator. Yes, Born Losers is the film that spawned 1974's Billy Jack but in more ways than not it's entirely freestanding and a total B-movie hidden gem of the late '60's. Laughlin saw a way to introduce the character of Billy Jack and at the same time capitalize on the biker movie trend before it faded. Billy Jack may be the movie he always wanted to make but this one fell into his hands like some metaphysical precursor. The cute chick in the white bikini (with matching cap!...and wait 'til you see the matching sunglasses) is Elizabeth James who also wrote the screenplay single-handedly loosely based on a real incident where two Hell's Angels raped a girl. Her contribution to this film cannot be understated and gives it a fresh and immediate vibe the picture glides on. Laughlin ran out of his own money during post and needed 300K more so he showed the film to American International and they bought out the original investors and gave him the money which landed up being their biggest return on investment ever. Up to now the film has made 36 million on a 400K budget. Born Losers is currently streaming free on Roku Channel only. 2.75 stars/2.75

At one time or another I think we've all had a situation with a close friend where they shut us out completely and didn't explain why. To what extent would you go to save the friendship and on their side what extent would they go through to keep you out of their life? A great basis for a drama but once you start bringing in mutilation as sacrifice into the equation, it's bound to have some seriously depressing and disarming effects. Let me put it to you this way -  in the dictionary under "buzzkill," it says to see this movie. Heavy is heavy but this is sledgehammer over the skull stuff.
Best picture material? Yeah, I suppose so. It is a beautifully shot and well-done picture, very thought-provoking and likely to stay with you for a while after viewing. Farrell is absolutely deserving of his nomination and proves once again why he's one of the greatest thespians of his generation. Irish actor Barry Keoghan is nomination worthy as a village idiot kind of character, he's totally awesome in this.
File this one under Love Story, Terms Of Endearment or any other heavy drama you consider to be guaranteed to bring you down. But if you don't care about that stuff and just look at the film without emotion and by objectivity, it's a must-watch.  3.5 stars/5 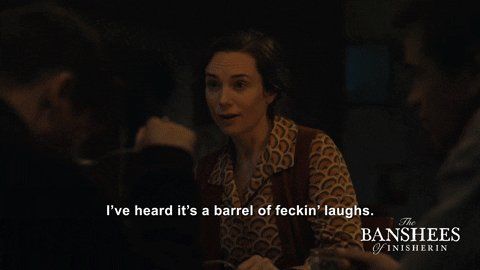 Posted by Tommy Ross at 9:26 AM No comments: 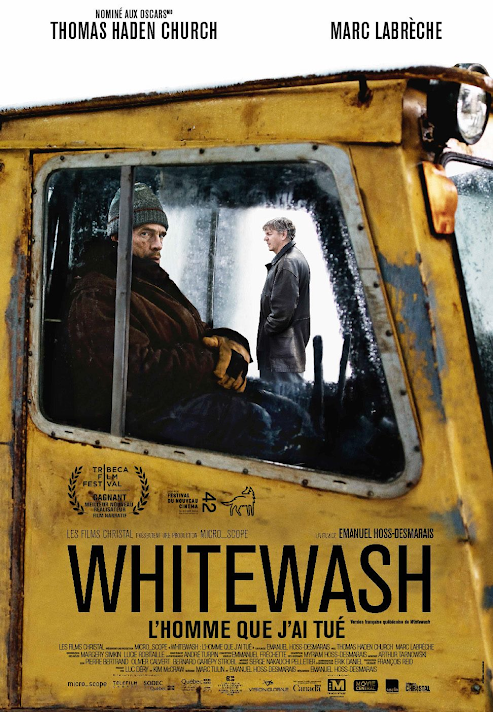 A Canadian psychological thriller starring Thomas Haden Church as a snowplow operator who while very drunk hits a pedestrian, passes out and wakes up to find he plowed his way into a section of forest. He hides the body, covers up the snowplow and starts to live out of it while he figures out what to do. While this is happening a series of flashbacks reveal the pedestrian was actually a house guest of Church's who starting taking advantage of his host's generosity and slowly reveals himself to be a total creep.

I seem to always like Canadian films due to their laid-back and easy-going nature. They seem to move slower but cut deeper in meanings. Whitewash is an excellently done thriller powered by Thomas Haden Church's performance that borders on nomination-worthy. The film did win several Canadian awards including best director. Actor Marc Labreche portrays the epitome of creepiness and I wouldn't have let him in my house for one minute.

I like this one, a unique editing style with the flashbacks kind of gives it extra personality. Once again, kudos to Church, an actor who I believe still has further depths to be explored, this unfortunately being his last substantial performance in a feature. Whitewash streams free on Tubi, Pluto, and Popcorn.  3.0 stars/5

REST IN PEACE, CINDY WILLIAMS - IF YOU WANT TO PAY TRIBUTE, WATCH "THE CONVERSATION" FIRST, THEN WATCH YOUR LAVERNE & SHIRLEY EPISODES 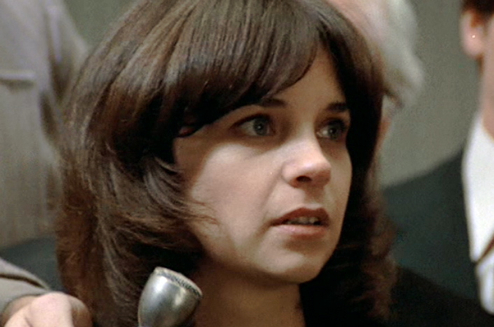 It's already getting hard to keep up with 2023 - Jeff Beck, Robbie Knievel, David Crosby....now Cindy Williams passing? I suppose it's a good time (and with this movie, when is it not?) to bring up Francis Ford Coppola's The Conversation in which Williams had a very different role. Not exactly the prudish "Laurie" from American Graffiti trying to get to college but now all grown up and in the center of a murder conspiracy. Here we see the dark side in her passively haunting turn as Ann, a character whose name is never mentioned.

She's never really present in the story either as we mostly see her every time Harry Caul listens to "the conversation" and then only in the murder sequences which are flashes and it's left up to the viewer to decide if they even really took place or are just in Harry's paranoid mind. She does actually encounter Harry in an elevator ride but nothing is said only for her to reappear later in one of Harry's nightmares.

The Conversation currently streams on Paramount +, Direct TV, Pluto and all VOD. 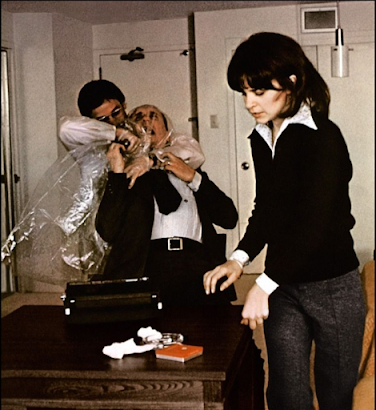 Posted by Tommy Ross at 8:52 AM No comments:

About ten years or a little less after his masterful script for the original Die Hard movie, Jeb Stuart got his first outing as writer and director with this often-slimed action thriller. I say often slimed because not many a good review has been garnered through the years and many potshots, tomatoes and slime has been slung it's way. Sure, it's not an instant classic leaving a lot to be desired with pacing, a bit of a mixed-up plot and oh god, Dennis Quaid but I'm here to tell ya this is a more than adequate thriller with a lot of pluses like photography and one great, actually one of my favorite Danny Glover performances. In a roundabout way the film is part crime thriller, part road trip, part murder mystery and part train movie.

Jered Leto and Glover work great together and the pair really are the film's protagonists. R Lee Ermey really proved he could act in this after his drill sargeant natural in Full Metal Jacket. The always enjoyable William Fitchner rounds out a great cast which includes Ted Levine and Leo Burmester.

Give this one a shot if you haven't seen it before, currently streams on Starz, Direct TV and all VOD outlets.  3.0 stars/5

JOHN BOYEGA IS "BREAKING" (2022) INTO A BANK - IS THIS REALLY A MODERN VERSION OF DOG DAY AFTERNOON?

BREAKING heralds its arrival as a modern day version of Dog Day Afternoon, the 1973 bank robbery movie with Al Pacino. While it makes a ga... 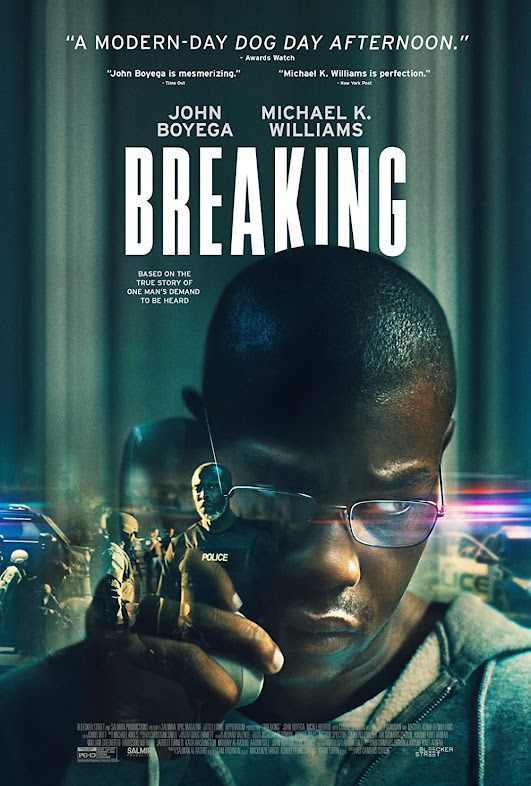 5 Stars - Only awarded to the precious few.
4 Stars - Excellent, see by all means.
3 Stars - Very Good, you should like.
2 Stars - Fair, like a frozen dinner.
1 Star - Poor, like a spoiled dinner.
ALL B-MOVIES, DRIVE-IN MOVIES AND TV MOVIES HAVE A MAX AWARD OF 2.75 STARS.